Hunter Valley and the Blue Mountains are both easily accessible from Sydney, with tour companies offering day trips to both or you can take the train or as we did hire a car and enjoy the drive.

Hunter Valley, located a couple of hours drive north of Sydney is famous for its vineyards and wineries. We hired a car and began to head up the coast to Cessnock. Heading out of Sydney, we drove over the Harbour Bridge as opposed to taking the tunnel and on to the freeway.

At Gosford, we left the freeway to meander through the villages alongside the Yengo National Park. We stopped for lunch in a sleepy little village called Wollombi, and had the tastiest Greek style lamb burgers.

Once in Cessnock, we found a vineyard called Tambauline, where I'm unsure of the owners business logic. All the vineyards offer free tasters normally amounting to about five 25ml samples before you're expected to buy a bottle of your favourite. This guy was chatting away the whole time, making fun of his advertising stating 'sold out is just a marketing term which makes you want to buy it. Same applies with stock running low, means we've got too much to shift!' He was also a liberal pourer, probably offering about 50ml each time. As we discussed which wine we would buy, he interrupted us to say 'don't feel obliged to buy anything, you're backpacking!' As it was £5 for a very nice bottle of white, we didn't let him put is off.

In Australia, there used to be a law that if you owned a pub or bar, you had to provide accommodation for anyone who became to drink to get home, resulting in most towns having an abundance of affordable rooms. We thought we would give one of these establishments a try and had a very comfortable and reasonably priced room with shared bathrooms; however as this was a Thursday night, there was only one other couple there.

The following morning we visited another vineyard with sculptures in its gardens. We tried a few more different wines here before buying another cheap bottle. This winery seemed a little more interested in making a sale, with samples being smaller, but you were still unsure if they were really that fussed either way.

After this we hit the road and took the scenic route down to the Blue Mountains. Driving in Australia is so much more pleasant with rolling hills and empty roads. We headed along a 35km section of 'unsealed road', which is a gravel road to you and me and only saw a couple of cars in the other direction as we snaked our way through sections of forest and open plains. On spite of all the signs warning of kangaroos, koalas, wallabies and wombats, we were not lucky enough to anything more than some large black and white birds.

We stopped for lunch by the river in a village called St. Albans, which was very different to the St. Albans we know in Hertfordshire. There was an old fashioned pub and general store opposite the picnic area alongside the river. After lunch, we continued through to Wiseman's Ferry and, expecting to find a bridge, nearly shot off the end of the road into the river, not realising that you had to take a car ferry to cross the river.

Our last stop before Katoomba was Windsor, which had a peaceful little pedestrianised area set back from the river.

As we neared the Blue Mountains, it began to rain and cool down quite considerably. We found our hostel and actually felt cold for the first time in months!

In the evening, we ventured down to the edge of the town where there are viewing points and trails around the Blue Mountains. We looked out on to three stacks of rocks known as the Three Sisters. Down the side of the Three Sisters is the giant staircase which is 900 steps to the bottom and rather more challenging back up again. We were more than pleased that this was not an option as it was drizzling and we only had a couple of hours of daylight left. We took the trail around the cliff to Katoomba Falls, which took about half an hour. The views were stunning, with the tree covered mountains as far as the eye could see looking a beautiful deep shade of blue in the distance. 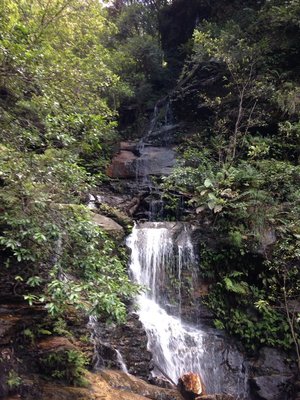 The following day we were pleased to see blue skies and the sun shining, while still cool, making for perfect walking conditions. Today we visited Wentworth Falls, where there are various trails along and just below the cliff edge. Again, the views were spectacular with the different coloured layers of rocks rising above you as you walked along the paths made mainly from rocks. The falls themselves were flowing well after all the recent rain, and had smoothed some of the sections of rock where it flowed before cascading over the cliff edge.

We followed the National Pass around the cliffs, taking you past various miniature waterfalls. The recommended walking time was 3-4 hours, a challenge Chris and I were more than happy to try and halve. We managed the route in about 50 minutes, if not less as we missed the marker for the end of that trail.

After the Blue Mountains, we began our journey along the East Coast from Sydney to Melbourne.

Previous Next Table of contents

Comments on this blog entry are now closed to non-Travellerspoint members. You can still leave a comment if you are a member of Travellerspoint.

If you aren't a member of Travellerspoint yet, you can join for free.