Taking the most direct route from Sydney to Melbourne would take about nine hours to cover the 881km on the highway inland, going through the capital of Canberra. The alternative is to meander along the Princes Highway, which weaves in and out of the various coastal towns, running along the seafront.

We started in the Blue Mountains and headed south east towards the coast, stopping off at the sleepy towns of Bowral and Bundanoon. Bowral had a quaint little high street set in traditional old buildings with a good selection of book shops and cafés. We stopped for a coffee and a browse around a couple of the shops. Bundanoon was more of a village and we just had a quick drive through it. 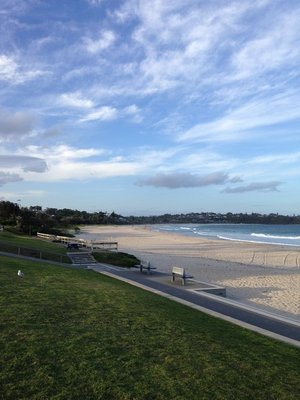 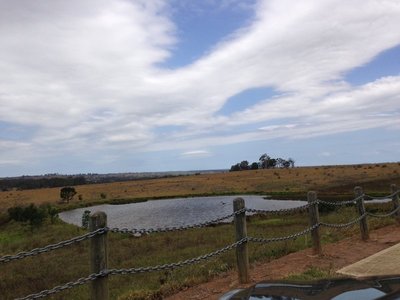 We continued across to the coast and headed down, stopping to look at the gorgeous coastline in Ulladulla, before arriving in Durras North for the night.

Durras North is in the middle of Murramarang National Park. We had planned to stop in Bateman's Bay; however it was recommended we stop here as it was less touristy and kangaroos are guaranteed. You don't need to tell is twice!

We booked a cabin on a holiday park, which assured you you would see kangaroos and as we were checking in, a couple went bouncing past the front of reception. Later that evening, there was one just hanging out down the side of the caravans, looking as though he thought if he didn't move or look at us, we couldn't see him. The following morning, they were just lounging around in the shade on an open area of the campsite. 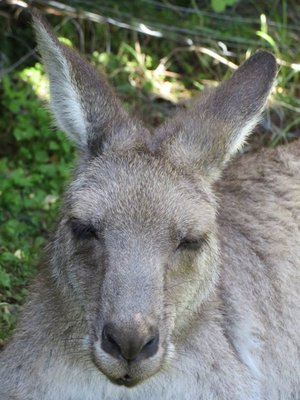 Our cabin, described as retro was a mix between that and vintage. It was more like a very old mobile home with a Portakabin attached for an awning living room area. The sofa chairs in the living room were vintage dark floral green, the dining chairs and table looked like it was from the 1950s with its part pink leather upholstery. The curtains were all various different dark floral patterns. Fortunately the bed was newer and incredibly comfortable.

The following morning, we walked the discovery trail along the lake and through the woods behind the campsite. Theses woods felt incredibly British, just lacking in heather! The route took a little over an hour and took you along the side of a tranquil blue lake with forest surrounding it on all sides.

After an early lunch, we walked along the deserted beach on the golden sands. The water was a beautiful turquoise and midnight blue mix with waves crashing at various points on the way into the beach. Sadly there were no kangaroos on the beach, preferring to stay at the campsite.

Back on the road again, we were stopping for the night at Merimbula, about an hour north of the border between New South Wales and Victoria. Along the way, we stopped for a cream tea in Central Tilba, which could probably be best described as Australia's answer to the Cotswolds. The buildings were traditional frontier style with timber weatherboard cladding and corrugated tin roofs, painted on earthy hues. The town was set in rolling green hills with a few token black and white cows. We climbed the hill to the water tower, which offered panoramic views of the valleys and mountains.

We stopped for the night at a motel in Merimbula, perched high up on the hill overlooking a picture perfect blue bay. The owner advised us do a driving route around town, which took us to a long stretch of beach, and a fisherman's jetty. The motel was west facing and so we watched the sun go down over the bay from our room.

The next morning we crossed the border into Victoria and immediately the weather improved. So far Australia had felt like those first days of spring, with the crispness gone but the sun not quite strong enough to warm through you. In Victoria, it's back to hot summer days, but at least without the humidity of Asia.

We stopped in Mallacoota, a town on the sea, where the river meets the ocean, forming various lakes and inlets which form part of Croajingolang National Park. The best way to explore these waterways is by hiring a motorboat for a couple of hours. Chris was thrilled that he got to be the captain of his own ship, even if at top speed it was passed easily by windsurfers. We passed through a couple of lakes and explored a couple of mangrove lined creeks.

After Mallacoota, we had quite a drive to Bairnsdale, where we were spending the night at another caravan park. Our reason for stopping here is to the East, on the coast there is a town called Paynesville. From here, you can park your car and take the ferry for free to Raymond Island. Raymond Island his home to a colony of koala bears, relocated here from Phillip Island in the 1950s. There is a koala trail around the island leading to a wooded area, where we found 8 little koala bears just chilling in the branches, each with their own tree, making it more of a challenge to spot them. I wonder how many we missed. Some of them watched you as you walked around their tree to get a better look. 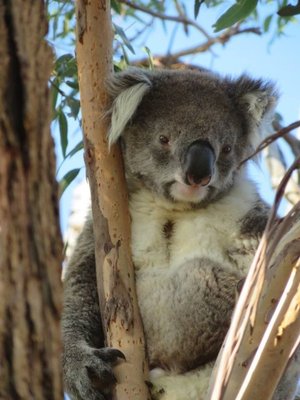 In addition to koalas, the island is home to some colourful green birds with red, blue, and yellow chests as well as kookaburras. After about an hour wandering around the island, we caught the ferry back to Paynesville. Now all we need to see are some wallabies and wombats.

Today is our penultimate stint along the coast before we arrive in Melbourne tomorrow.

We headed inland to Walhalla, a former gold mining town, which thrived during the 19th century. The town is set in the hills about 40km from the main highway. This town is very traditional, with its original post office, which avoided renovation or conversion and therefore looks just as it would have done 100 years ago. There is also the original wooden firehouse set over the river and an elevated bandstand in the centre of a very pretty garden alongside the stream. There are a couple of cafés, a hotel and a general store, but the main attraction is a trip down the disused gold mine.

The mine entrance is located 500m up the hill out of town, and offer tours at various times of the day during the weekends with one a day on weekdays. We joined the half one tour and donned our hardhats. The tunnel into the mine was quite high and we were able to stand most of the way through the 500m tunnel into the mountain. The edges of the tunnel were jagged from where they had exploded their way through. Along the floor lay the original tram lines used for removing the gold. The mine had a couple of lower tunnels, but even they were 5ft. One area opened out, which used to be home to the boilers and is sat next to the former lift shafts.

After looking around the old post office and the town museum, we did the final couple of hours to Phillip Island, home of the Little Blue Penguins, which tend to be referred to as just 'Little Penguins'.

We arrived at Phillip Island at 6pm, had some dinner before heading to the beach where the Little Penguins nest. The penguins come ashore at dusk, which is currently 21.15. We arrived shortly after 7pm to guarantee front row seats on the sand.

Walking along the boardwalks to the beach, there was a wallaby posing for photos up on the sand dunes. Another Australian animal ticked off the list!

Shortly after 9pm, the first few penguins began to come out of the sea and waddle up the beach. They were so cute as they came out of the water, being knocked over by the waves and pulled back in again. Some of them were more skilled than others at getting out; one took nearly five minutes. Once they made it out of the water, they had to scurry up the beach past all the seagulls, who were not too much smaller than the penguins who are only just over 30cm high. They tended to leave the water either alone or in groups of about four or five. On the beach, they would congregate at the bottom of the sand dune before heading up in a line to find their waiting chicks. 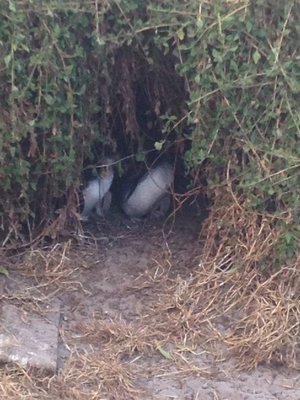 As it's towards the end of the breeding season, the chicks are now about six weeks old and are nearly ready to leave the nest. As we walked along the boardwalks, which overlook the nesting sites, we saw an adorable little chick, who was just beginning to lose his brown fluffy baby feathers, so he looked like he had a fur gilet on with his flippers coming out the side.

We were finally kicked out at 10.30pm to find one in the car park all on his own.

We returned to our cabin for the night, ready for our final drive to Melbourne the following day.

Previous Next Table of contents

Comments on this blog entry are now closed to non-Travellerspoint members. You can still leave a comment if you are a member of Travellerspoint.

If you aren't a member of Travellerspoint yet, you can join for free.